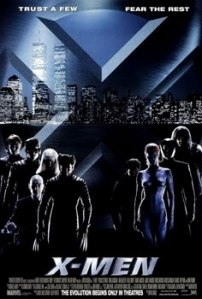 Singer is a genius, pure and simple. Anyone who could create something like The Usual Suspects has to be a genius. No two ways about it. And thus he was tabbed to do the long-awaited film version of the comic book X-Men. And to his credit, he did a wonderful job with what he was given.

The story centers mostly around Wolverine (an interestingly-coifed Hugh Jackman) and Rogue (Anna Paquin), who find themselves thrown together and caught in the middle of a longtime battle between old friends Magneto (Ian McKellen) and Professor Xavier (Patrick Stewart). Wolverine and Rogue, along with Magneto and Xavier, are mutants—humans with various special powers. Magneto and Xavier run the two cliques of mutants, if you will, and Wolverine and Rogue swear allegiance to neither; they don’t have much time to weigh their options, though, as the two sides fighting over them attempt to recruit them for a very dastardly deed that Magneto’s got going on.

A plot that simple would have made for a bang-up two and a half hour action film. Where the writers went wrong was in trying to add too much in the way of subplots, and they ended up with something a lot more confused than it really needed to be. A focus on the humanity of the mutants and the decisions that Wolverine and Rogue need to make would have been enough to fill a film (I mean, come on, The Usual Suspects wasn’t all that long on plot, either; all the greatness came from the subtleties within an extremely simple mystery). Still, if looked at somewhat simply, it does work as an action film; there’s a good deal of eye candy, stuff blows up, Ray Park does his usual flying-leap-all-over-the-place thing, and Patrick Stewart and Ian McKellen aren’t considered two of the greats for nothing, you know.

A great way to kill some time, but don’t be expecting a whole lot of depth. ***

Media critic (amateur, semi-pro, and for one brief shining moment in 2000 pro) since 1986. Guy behind noise/powerelectronics band XTerminal (after many small stints in jazz, rock, and metal bands). Known for being tactless but honest.
View all posts by Robert "Goat" Beveridge »
← Occultic War (2005): It Only Gets Worse
We Don’t Care About Music Anyway (2011): The Rituals of Decay →