School bully with his crew cut and his shoulders, telling me I was a pansy… photo credit: joeide.com

Detective novels are a dime a dozen, and have been just about forever. If you’re going to break into the genre successfully, as hundreds of authors try to do per year, you have to come up with an angle. Devilish mysteries. A pace the reader has never seen before. Complexity, but on a scale the laymen can understand. Amazing characters. Now we have debut author Joe Ide, who did a fantastic job with the last of those to come up with IQ.

END_OF_DOCUMENT_TOKEN_TO_BE_REPLACED

The Devils (1971): You Have Been Found Guilty of Covenants with the Devil

I feel as though my heart has been touched by Christ. photo credit: moviescreenshots.blogspot.com

N.B.: This is more of an essay than a review, and as such, some of what is contained herein could be considered spoilers. If that sort of thing offends you, enter at your own risk. 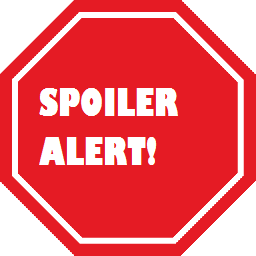 END_OF_DOCUMENT_TOKEN_TO_BE_REPLACED

Because your kiss is on my list of the best things in life.
photo credit: film-book.com

The whole time I was watching Antiviral, the debut film from Brandon Cronenberg—if the last name sounds familiar, it’s because Brandon is the son of revered Canadian filmmaker David Cronenberg—I was thoroughly enchanted with it. I kept having to remind myself that, yes, the movie does have some shortcomings, and they kept it from rating higher than it did. But the movie’s immense style made me want to gloss those shortcomings over. This is definitely a case of form over function, and in that, early Brandon is on the same track as early David was—and by “early” with David Cronenberg I’m talking about his earliest features, 1969’s Stereo and 1970’s Crimes of the Future, rather than the “early” stuff everyone’s seen (Shivers, Rabid, and The Brood, by the last of which Cronenberg had already, as far as I’m concerned, reached the heights of body-horror greatness he would plumb until 1999’s eXistenZ). When it comes right down to it, you’re going to want to say you knew him when.

END_OF_DOCUMENT_TOKEN_TO_BE_REPLACED 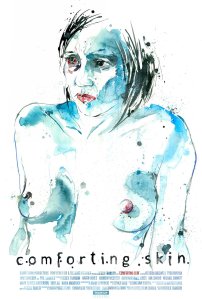 The first half-hour or thereabouts of Comforting Skin is annoying in the extreme. It feels like it’s going to be just another mumblecore movie (not even a mumblegore movie because, you know, no violence). You know the drill. Annoying characters you can’t stand doing things they couldn’t afford in the real world without anything much really going on around them. And then Koffie (Good Luck Chuck‘s Victoria Bidewell), our main character, gets her tattoo. And everything changes.

END_OF_DOCUMENT_TOKEN_TO_BE_REPLACED 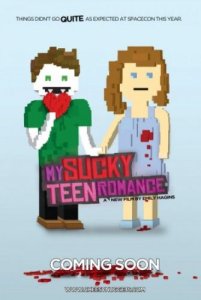 “The only thing they told me not to eat on a first date was spaghetti!”
photo credit: yuforum.com

Despite only giving Emily Hagins’ first feature, Pathogen, three stars (but let’s remember, three is still “above average” on a five-star scale), I unhesitatingly recommended it in my review because, well, it’s a zombie movie that was made by a twelve-year-old and, aside from having basically no budget and some problems with acting ability, was a clever, fun take on the genre. Hagins returned five years later with her third feature, My Sucky Teen Romance, a teen vampire comedy whose purpose is to make fun of teen vampire comedies. And my favorite thing about it is that in every way, it’s obvious Emily Hagins took Pathogen as a learning experience. My Sucky Teen Romance is a much better movie technically, with much more solid acting and a clever script (written by Hagins). In short: if you like your teen comedies with more romance than raunch, My Sucky Teen Romance is for you.

END_OF_DOCUMENT_TOKEN_TO_BE_REPLACED

Only late enough that December’s capsule reviews are coming next Monday…
[update 25Nov2014: and this should have been posted yesterday, but WordPress seems to be having problems with graphics uploads for some reason. I will get there, honest…]

END_OF_DOCUMENT_TOKEN_TO_BE_REPLACED

Never bite the hand that bleeds you.
photo credit: subscene.com

There a number of directors who have become canonical over the years whose films I have simply never gotten. Woody Allen. Mario Bava. Sam Fuller. Every time I dig into a Fuller movie I try and see what it is that sets him apart, and every time I fail. My most recent attempt was with the 1982 racism melodrama White Dog, and I think that perhaps I’ve figured out what the canon sees in him. I still didn’t get to the “all that and a bag of racists” point with this one, but it’s starting to make sense. The thing about Sam Fuller’s strain of melodrama, if I’m right in my hypothesizing, is that in movies like Shock Corridor and Pickup on South Street, both of which left me kind of cold, Fuller was doing that gig first; Douglas Sirk and Grace Metalious and Russ Meyer and all that lot would come after and hone the genre, so that when Fuller returned to the fold in the eighties, he not only had his own base to work from, he had everyone else’s, too. And I think that, more than anything, may be what impressed me about White Dog: Fuller wasn’t afraid to build on the work of others, rather than focusing obsessively upon his own corpus.