I had too much to dream last night.
photo credit: flicksandbits.com

I try—these days, anyway (I make no promises of same in my vault reviews)—to limit my comments about actors of either sex to their performances rather than their looks, other than a generic comment here and there about eye candy when it’s obvious that a writer obviously put in a part of Nameless Hot Blonde (especially in a lead role). But given the subject matter and the thrust, no pun intended, of Lovelace, I think it’s fair to open this review by saying that from the moment I set eyes on a nineteen-year-old actress named Amanda Seyfried in 2004’s phenomenal comedy Mean Girls, I developed a life-size crush on her. I think she is, in the vernacular, crazy gorgeous, one of those actresses who usually ends up getting cast as the hanger-on (viz. Mean Girls) or the mousy best friend (Jennifer’s Body, about which Seyfried was the only thing worth watching) when she’s the prettiest woman in the room. (At least she’s got job security, since Janeane Garofalo, who was often relegated to those same roles, seems to have chosen to focus more on TV these days.) So as soon as I heard she was going to be starring in a Linda Lovelace biopic, I was champing at the bit. One of the most beautiful women in the world playing one of the most famous porn stars in the world? How could this go wrong? That turns out to be a far more complex question than it probably deserves to be, and because of that, I watched Lovelace almost a month ago as I write these words, and I’m still pondering the question. That leads me to believe the film is maybe more worth your time than I initially believed. But I am, as usual, getting ahead of myself.

END_OF_DOCUMENT_TOKEN_TO_BE_REPLACED

A Year on Planet Alzheimer (and Slightly Longer in Canada) (2004): Take Off to the Great White North

Carolyn Steele, A Year on Planet Alzheimer (and a Little Longer in Canada) (AuthorHouse, 2004)

Watch out where those huskies go.
photo credit: goodreads

I am, as a rule, not a fan of memoirs. They’ve gotta do two things to make me sit up and take notice. First, you have to have done something that’s actually worthy of writing a memoir about. (That running joke in Tove Jansson’s books about Moominpappa writing his memoirs? That really WAS a joke in the fifites. Now, it’s business as usual.) Second, your life can’t be the sole purpose of the book’s existence; you have to spend at least as much time talking about that bit in Part One as you do about what you ate for lunch every Tuesday. This is on top of all of the other strictures about what makes a book good—character development, pacing, etc. (Oh, you thought those were only worth paying attention to in fiction? Try reading 100 Strokes of the Brush Before Bed to find out just how bad a nonfiction book with no pacing or character development can be. Yes, it’s a memoir.) A Year on Planet Alzheimer fits both bills. It’s not a perfect book by any means, and both the jacket copy and the book itself play something of a part in that (more on this later), but as far as memoirs go, it’s one of the better ones I’ve read in recent memory; the last one I remember liking this much was Alison Bechdel’s Fun Home, which (I just checked) I read back in 2006.

END_OF_DOCUMENT_TOKEN_TO_BE_REPLACED 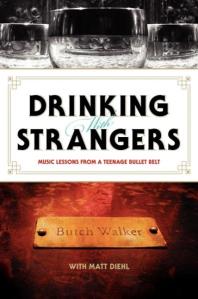 Closer to the truth and further from the sky.
photo credit: neontommy.com

Butch Walker is, among traditional musicians (“traditional” here as opposed to the normal kinds of musicians I listen to, who specialize in noise, death industrial, and that sort of thing), one of the best in the business today. Over the past decade and change, he’s released half a dozen studio albums under his own name after stints fronting hair-metal band SouthGang in the eighties and Marvelous 3 in the nineties. All of them are sterling; Walker is, as far as I’m concerned, the best lyricist in rock today, which is why he gets paid big bucks to write hits and produce records for bands ranging from indie-rock stalwarts Weezer to Japanese pop tarts Puffy, and stopping off in a lot of places in between. (None of his own work sounds even remotely like the stuff he does working with anyone else. He explains that in the book, almost in an aside.) Listen to a random song from a Butch Walker album released since 2001 and you’re pretty much guaranteed gold. Which is why I broke my usual rule against dipping into one of my least favorite genres, the memoir, to read Walker’s. Memoirs are the reality TV of the book industry; for every one worth your time, there are a thousand that, like the Necronomicon, will drive you insane if you even open the cover. (It is not, I think, a coincidence that so many reality TV “stars” pen memoirs as a way to continue their fame after the cameras stop rolling for good.) You probably know which of those I was hoping for here.

END_OF_DOCUMENT_TOKEN_TO_BE_REPLACED

Capsule Reviews, June 2014: From the Vault

It’s hard to tell what you’re going to get when you find yourself watching a Jean-Jacques Annaud film. Some of his output deserves instant classic status; some should never have seen the light of day. Enemy at the Gates balances on the thin line between the two, but does eventually manage to fall on the side of the former.

Annaud teams up with Alain Godard (as in most of his truly fine efforts) to offer up a screenplay about two snipers, Vassili Zaitsev (Jude Law) and Major Konig (Ed Harris) during the 1942/43 siege of Stalingrad. The two are backed by a solid cast of minor characters, including the off-kilter-genius casting of Bob Hoskins as Krushchev. And while Annaud and Godard use the story of Zaitsev to examine the pros and cons of propaganda, they thankfully never lose focus on the real story– two guys trying to kill each other while a war rages around them. It doesn’t sound all that interesting when stripped down, and there are certainly a few places where the film drags, but overall it works much better than one would expect it to. Jude Law is, as always, a pleasure to watch onscreen, and Ed Harris gives one of his better performances (though he can’t seem to decide if he’s supposed to be speaking in a German accent or not). Worth a rental. *** ½

END_OF_DOCUMENT_TOKEN_TO_BE_REPLACED 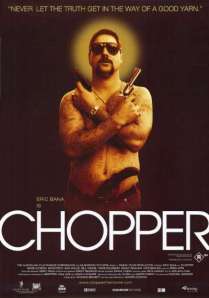 The Man, the Myth, the Legend (in his own mind).
photo credit: maartenbouw.blogspot.com

Andrew Dominik makes his writing and directing debut with the fictionalized biography of Mark “Chopper” Read, well-known Australian criminal and bestselling novelist. Eric Bana, soon to be seen in a theater near you in Ang Lee’s version of The Hulk, stars as Chopper, a man who dreams of being the world’s best-known (and loved) criminal. Problem is, he just can’t seem to get anyone to take him seriously. The astute viewer will spend much of the film wondering why, and then realized that the “fictionalized” part of the biography is Chopper himself; it would be hard to argue with the hypothesis that, if Chopper were really as witty and intelligent as the film makes him out to be, he probably WOULD be the world’s best-known and best-loved criminal. Bana throws one-liners even faster than Red Skelton did, and he rarely misses a good shot (verbally, anyway). Through the eyes of Dominik, Mark Read really is the “good bloke down on his luck” in which he’s portrayed in interviews.

END_OF_DOCUMENT_TOKEN_TO_BE_REPLACED

Before Night Falls (1993): The World’s a Nicer Place in My Beautiful Balloon

One of the only memoirs ever written actually worth reading.
photo credit: romanianstudies.org

Arenas’ memoir of life in Cuba has recently been made into one of the finest films extant by Julian Schnabel. Schnabel did an excellent job with the book; while his interpretation of the text was loose in places, he managed to capture in images the style of Arenas’ writing.
END_OF_DOCUMENT_TOKEN_TO_BE_REPLACED

Not what you think, looking at that cover.

Testimonials can be an integral part of being a born-again Christian. They also lend themselves to all kinds of distortion, depending on the lengths of time since the incidents, bad memories, etc. I’ve no idea whether Judy Mamou is distorting anything; for all I know this truly is the gospel truth. But I have to say, the cover copy for this one could very well have read like a late-fifties movie poster of the Rebel Without a Cause/Reefer Madness School. “Sex! Drugs! Loose Women! All conspiring to lead this small-town girl into a life of decadence and despair!” Not surprisingly, it also reads like the script to one. There’s only so much one can read about chemical dependency, abuse, and licentiousness among the California elite without becoming inured to it, and I think most of us hit that point right around the time Kenneth Anger released Hollywood Babylon. *