In the Bedroom (2001): What Happens in Carrie Stays in Carrie 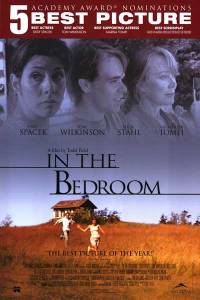 Todd Field’s first feature film feels like a first feature film. The movie is slow enough to be annoying. I’ve seen sleeping three-toed sloths that movie faster than this movie. Huge stretches of time go by without anything of consequence happening. Food gets put into the refrigerator and is immediately taken out, and has had time to spoil in the interim. Did I mention this movie is slow?

Well, the title is accurate, at least.
photo credit: sundance.tv

That said, every nomination the movie got is well-deserved. Sissy Spacek and Marisa Tomei are two of the most under-appreciated actresses of their respective generations, and both are going through career revivals right now. Putting them together in here was a stroke of brilliance, and both give Oscar-worthy performances. Tom Wilkinson, as Spacek’s husband, also gives a career-best performance, as does–well, pretty much everyone in the cast. I just wish they’d have done it a little faster.

The story, based on Andre Dubus’ short story “Killings,” is set in a small town on the coast of Maine. Frank Fowler (Nick Stahl [Eye of God, Disturbing Behavior, et al.]), an architecture student, is home from college and dating an older woman, Natalie Strout (Tomei). She’s separated from her husband, but not divorced. The husband, Richard (William Mapother [from any number of Tom Cruise films—probably because he’s Cruise’s cousin]), is one of those nasty beer-and-a-wifebeater types prone to bouts of violence and not terribly happy about Frank messing with his property. (This, of course, is the attitude that drove his wife to leave him in the first place, but hey.) Richard and Frank get into a series of confrontations throughout the first hour of the film, culminating in a moment of violence that changes the situation drastically. You’ve probably read enough reviews of this film to know what happens (I saw it in so many reviews I assumed it happened in the first five minutes; I figured no one would reveal a major plot point that doesn’t come until an hour into the film. More fool me.), but just in case you’ve been avoiding them, I’m not going to spoil your fun.

When I close my eyes, I can see forever…
photo credit: cinemasights.com

That’s the climax of the film; the last hour deals with how the main characters respond to it over the course of the next few months. That’s when it becomes obvious that the film creeps up on you. Somewhere along the way, while being annoyed at the movie’s slowness, you’ve still come to care about the characters and what happens to them.

I’ve seen some noises made about the movie’s supposedly unnecessary ending. Personally, I’d like to know what the people making those noises thought would have been more appropriate; the movie’s ending seemed, to me, to be the only honest one available. I didn’t think it was wrong at all, I just wish it would have happened with a bit more pace behind it. ***

Media critic (amateur, semi-pro, and for one brief shining moment in 2000 pro) since 1986. Guy behind noise/powerelectronics band XTerminal (after many small stints in jazz, rock, and metal bands). Known for being tactless but honest.
View all posts by Robert "Goat" Beveridge »
← Along Came a Spider (2001): Down Came the Rain
Hart’s War (2002): Pyrrhic Victory →