Reves de Poussiere (Dreams of Dust) (2006): There’s Gold in Them There Hills 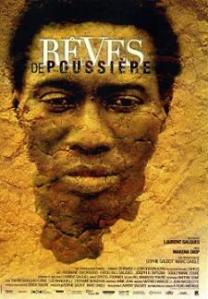 “There is a face beneath this mask, but it isn’t me. I’m no more that face than the muscles beneath it, or the bones beneath that.”
photo credit: codrinarsene.com

The Horatio Alger story is such an integral part of the American mythology that oftentimes, as Americans, we forget that the meat of it is a global, if not a universal, conceit—people movie between country A and country B with nothing all the time and try to carve out a place for themselves in a new, oftentimes harsh and unforgiving, culture. Horatio Alger, of course, had his head mired in the stars, and when one looks at such a thing more realistically, one is often best served tempering Horatio Alger well with Alger Hiss. That is certainly the case with Dreams of Dust, the slow, bleak, angry-but-helplessly-so debut film from French director Larent Salgues.

Workers after a hard day in the mines.
photo credit: filmmovement.com

Plot: Mocktar (Lumumba‘s Makena Diop) is a Niger native who has come to Burkina Faso—to look for work, he says, to raise enough money for his family to come and join him. He goes to work in one of Burkina Faso’s primitive, terrifying gold mines, but it quickly becomes obvious that Mocktar has little aptitude for the work (he tells his new boss that he was a farmer in Niger, and we have no reason to disbelieve him). There is a subplot about Mocktar’s past, but most reviews make far more of it than there actually is here; I will just note it in passing and stress that this is more a slice-of-life movie than any sort of mystery, a fish out of water trying to make his way in a new society, trying to learn the new skills, both vocational and cultural, he needs to adapt to his new circumstances.

At its heart, the movie is a character study of Mocktar and the often-painful lessons he learns in his first few weeks at the mining camp. The culture shock is low-key, but extreme. Instead of playing the fish out of water angle for laughs, as is so often done, Salgues takes his cue from the edge-of-the-desert landscape of Burkina Faso—this is obvious from the movie’s first sequence, which is sublime in its minimalism—and keeps the tone of the movie bleak without ever letting it slide all the way into tragedy. A tough line to walk, and to viewers who are more used to mainstream filmmaking, this will likely lead to the ending seeming vague. That’s not unintentional; when the movie ends, the lives of the miners at the camp do not, and Salgues does not want us to forget this. This is a good little movie indeed—well worth watching. *** ½

Media critic (amateur, semi-pro, and for one brief shining moment in 2000 pro) since 1986. Guy behind noise/powerelectronics band XTerminal (after many small stints in jazz, rock, and metal bands). Known for being tactless but honest.
View all posts by Robert "Goat" Beveridge »
← Blow-Up (1966): Well They Got the First Part Right
The Beyond (1981): Arachnophobia →