Stripperland (2011): The Only Thing About This Movie Not Stiff Is You 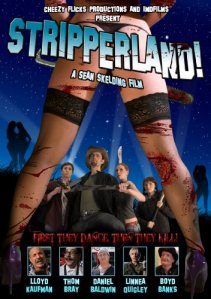 Had I been able to see that cover more clearly on Netflix Instant, I might have saved myself a world of hurt.
photo credit: Amazon

I have to admit, I did not see this one coming. It just never occurred to me when I didn’t see the Asylum’s logo anywhere on this that it was going to end up being a Zombieland mockbuster. Silly me. But by the time we hit their take on the running Twinkie gag from that far, far superior movie, I knew there was no way this pile of tripe was going to be able to rescue itself from the latrine it had dug itself. Unfortunately, I was all too right.

Oh, dear, Daniel, what were you thinking?
photo credit: katu.com

Plot: …well, if you’re anything like 95% of the rest of the world, you’ve already seen Zombieland. Just make the undead all strippers, add in a horrific Daniel Baldwin cameo as a rapper whose music causes zombie strippers to stop attacking people and just listen, and leach out all the character development and caustic wit that made Zombieland such an excellent film and you get this low-rent take.

To be fair, if you put the Silent Hill nurses in stripper outfits, you might get the same scene.
photo credit: horrornews.net

Man, I keep trying to come up with something even remotely good to say about this movie, and every time I do, an apparition of Woody Harrelson appears by my side and hits me with a shovel. It’s, um, not quite as bad as Infected? ½

Media critic (amateur, semi-pro, and for one brief shining moment in 2000 pro) since 1986. Guy behind noise/powerelectronics band XTerminal (after many small stints in jazz, rock, and metal bands). Known for being tactless but honest.
View all posts by Robert "Goat" Beveridge »
← ‘night, Mother (1986): Exit Stage Right
b.Monkey (1998): You Can Take a City Girl to the Country… →