RSS Feed
← It Was a Dark and Stormy Night (1984): And the Prose Rang Out Purply
Stripperland (2011): The Only Thing About This Movie Not Stiff Is You → 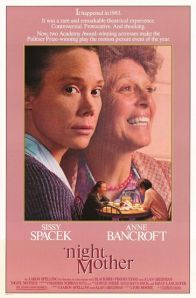 Hope in the midst of despair, or vice versa.
photo credit: impawards.com

Having just finished reading Marsha Norman’s wonderful Pulitzer-winning play [ed. note 2014: that review will be pulled from the vault on the next capsule review day, scheduled for 3Feb2014], I figured I’d check out the movie. I’m still trying to decide whether it was a mistake or not. The first five minutes made me think so—for one thing, I knew I was in for trouble when I saw “produced by Aaron Spelling,” and for another, the syrupy, bucolic music (supplied by TV music guru David Shire, who’s about a half-step above Yanni on the subtlety scale) makes a mockery of the play’s subject matter: a late-thirtysomething divorcee, Jessie (Sissy Spacek) tells her mother (Anne Bancroft) that she’s going to kill herself in a few hours, and the two of them go back and forth about the decision while reliving memories and having heart-to-hearts about various topics. The play is notable for being one of the first, and still one of the only, level-headed looks at suicide in American literature, and after that first bit is out of the way (it actually continues on about fifteen minutes after the opening credits, and none of it’s in the play), we get down to the brass tacks of Ms. Norman’s contest of wills between a woman who’s tired of life and a mother who’s too scared to be tired of life. And it’s fantastic. Spacek and Bancroft both play their roles to the hilt, and while the dialogue isn’t quite as intense in the film as it is in the play (cameras being what they are, the characters are allowed to move about the house, where the play takes place almost completely in two rooms), it still works extremely well. And then comes the end of the play… and David Shire works his magic once again, wrecking the film’s effect. (The movie also emphasizes one line I managed to pass over in the play, during Bancroft’s last speech, that’s just plain bad, and one wonders why Norman, who adapted her own play for the screen, allowed it to remain.)

Fast forward through the first twenty minutes (up to where Spacek asks Bancroft where the gun is, which opens the play) and stop at the last line of the play (“Loretta? Let me speak to Dawson, honey.”) and you’ve got a decent adaptation of an excellent play. ***

Trailer or fanvid? It is labelled as the former.

Media critic (amateur, semi-pro, and for one brief shining moment in 2000 pro) since 1986. Guy behind noise/powerelectronics band XTerminal (after many small stints in jazz, rock, and metal bands). Known for being tactless but honest.
View all posts by Robert "Goat" Beveridge »
← It Was a Dark and Stormy Night (1984): And the Prose Rang Out Purply
Stripperland (2011): The Only Thing About This Movie Not Stiff Is You →