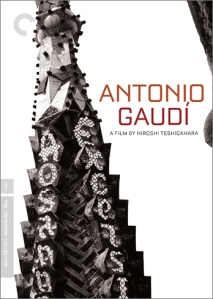 I only know who Antonio Gaudí is thanks to a mix-up at my local library. I can no longer remember what I was supposed to be picking up, but it was not a book about modern architecture. That said, when the library hands me something, even as a mistake, I usually read it, and so I ended up finding out some things about the architect. Put him together with the guy who directed Face of Another and I’m game. Of course, this being Teshigahara, Antonio Gaudí is in no way your typical documentary, and that is much to the film’s credit. In fact (spoiler alert!), by the time I was done watching it, it had become my favorite Teshigahara film.

Gaudí, it seems, was incapable of drawing a straight line.
photo credit: altoonsultan.blogspot.com

There is a minimum of the stuff one expects to find in a documentary. Instead, Teshigahara focuses on Gaudí’s designs, giving us beautiful shots of buildings, sweeping panoramas followed by minuscule close-ups, focusing not only on the big, flashy buildings, but taking us to a park, a garden, a crypt, you name it. There’s a real sense of breadth here, and Teshigahara captures it beautifully.

I’m not entirely sure what else to say about the movie, as is evidenced (not like you could know this, but still) by the fact that I have scheduled this review to be posted on January 7, 2014, and I am still sitting here looking for a closing paragraph on the night of January 5. Everything I come up with to stick here is just a retread of what I said in the first two paragraphs, mostly about how ridiculously beautiful the thing is and how well it was shot. So I will just give up trying and tell you that if you don’t have a Hulu Plus subscription to be able to access the Criterion Collection on demand, this movie alone would be worth the subscription fee. Having access to so much of the rest of the collection is just icing on the cake. ****

The full film. I’m kind of stunned it hasn’t been taken down, but it’s bee up there two years.

Media critic (amateur, semi-pro, and for one brief shining moment in 2000 pro) since 1986. Guy behind noise/powerelectronics band XTerminal (after many small stints in jazz, rock, and metal bands). Known for being tactless but honest.
View all posts by Robert "Goat" Beveridge »
← The End of Alice (1996): I’m Having an Old Friend for Dinner
Future Shock (1993): Smack to the Future →