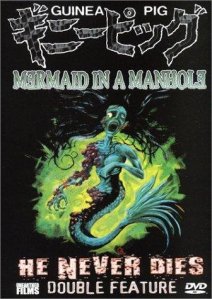 Under many names…
photo credit: IMDB

Mermaid in a Sewer, one of the four Guinea Pig films directed by Hino, is the only one that rivals The Flower of Flesh and Blood in notoriety and popularity. Unlike its more graphic and brutal cousin, Mermaid in a Sewer (often translated as Mermaid in a Manhole, Mermaid in the Bathtub, or any other number of similar titles) actually has a plot to it. An artist, obviously modeled on Hino himself (Hino’s style is unmistakable), draws his inspiration from things he sees and finds in his local sewer system. One day, what he finds among the muck and stench is… a mermaid . Yes, a mermaid. A very attractive one at that (and one is forced to wonder what, exactly, would motivate an actress to play a part like this…). We find out, after the two have conversed a bit and he’s done a preliminary sketch, that she is wounded. He takes her home (how he gets her there without anyone noticing is beyond me) and installs her in his bathtub in order to take care of her.

You can see where this is going, I’m sure. Wound + sewer = bad, bad things.

“Every once in a while, I just like to faint. Keeps people on their toes.”
photo credit: subtitledhell.wordpress.com

I’d comment on the acting, dialogue, etc. if I actually understood Japanese. Sometimes watching films in foreign languages with no subtitles is good for the soul, I guess (though anyone who happens to have a script from either 2 or 3 in English who’d be willing to send a copy my way would be remembered in my will, and not with a debt). The couple who lives downstairs form the artist pop up every now and then to give what would seem a comic turn to the film, which only adds to the disgust and horror. If you get nightmares easily, this is not a film you ever want to see. As Joaquin Phoenix said in what was one of only a handful of lines in 8mm that’s actually worth remembering, “there are some things you can’t un-see.” I could never pop this tape into the cassette player again, and certain images would remain as fresh in my mind as they are right now. It’s that bad. *** ½

This one, too, is now fully available on Youtube.

Media critic (amateur, semi-pro, and for one brief shining moment in 2000 pro) since 1986. Guy behind noise/powerelectronics band XTerminal (after many small stints in jazz, rock, and metal bands). Known for being tactless but honest.
View all posts by Robert "Goat" Beveridge »
← Best I Saw, 2013 Edition
The Last Broadcast Chapter Two: Pandora’s Dawn (2013): The Boring Dead →