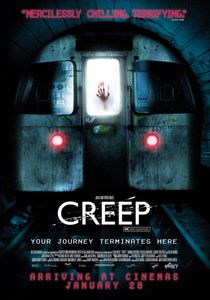 I keep reviewing Christopher Smith movies, and I keep reviewing them favorably, though it has always seemed to me that just under the surface there’s a truly great filmmaker straining to get out, while Smith’s current output still ranges from good to firm. Creep, his debut feature, is ironically the last of the four he has directed at the time of this writing (April 2013) that I’ve sat down and watched. And of the four, Creep may be the one that comes closest to greatness, though Black Death did give it a run for its money.

Creep is the story of Kate (Lola Rennt‘s Franka Potente), a bored partygoer in London who heads off to another party via the subway—but falls asleep on the platform on the way to party #2, waking up only after the station has been shut down for the night. She meets a few of the station’s otherwise-homeless denizens and fights off another alumnus of the party she’d just come from (The Children’s Jeremy Sheffield) (and here’s plot hole #1—would this guy, drunk and drugged up, have really hung around the platform that long waiting for her to wake up, or would he have just taken advantage of the situation when she passed out?) before things get really interesting. And by “interesting” I mean “people start dying and once again Franka Potente finds herself running for her life in a movie.”

It’s night, a mutant serial killer is chasing us, and we only have a single rudimentary weapon. What could possibly go wrong?

It all sounds like it’s been done before. And trust me, it has, but as I have said a number of times before, Smith’s specialty is taking tired plots and giving them legs. It helps that Smith, here, also assembled a monster cast, including Paul Rattray (Max), the late Ken Campbell (A Fish Called Wanda), Vas Blackwood (Lock, Stock, and Two Smoking Barrels), Kelly Scott (Atonement), and Sean Harris (The Discovery of Heaven) in principal roles. Some were already established and some were on their way up—the casting of Harris was especially prescient, it turns out—but all bring their A games to the table, which is part of what makes this flick so much fun to watch. The other part is seeing all these pieces we’ve seen dozens of times before (and many times since—I’m convinced that both the filmmakers on the Canadian flick End of the Line and the game designers for Hellgate: London are both huge group fans of Creep) put together in interesting, if not unique, ways. (Smith seems to have honed that part of his craft as he went along.) It’s nothing you haven’t seen before, but I had a fun time with it; monster-movie fans could do a lot worse than checking this one out. *** ½

Media critic (amateur, semi-pro, and for one brief shining moment in 2000 pro) since 1986. Guy behind noise/powerelectronics band XTerminal (after many small stints in jazz, rock, and metal bands). Known for being tactless but honest.
View all posts by Robert "Goat" Beveridge »
← The Biggest Game in Town (1983): Yes, We Really Do Act This Way
The Black Venus (1946): 1940s Novel, 1990s Sensibility →