Betrayal at Stonehenge 1000BC (2000): Where the Children Dance to the Pipes of Pan 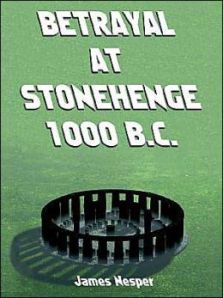 Where the demons dwell. Where the banshees live and they do live well.

I’ve put together a Best Books I Read This Year list since a couple of years after I started seriously reviewing books; the first one was sometime in the late eighties. (I don’t do a Best of the Year list for books because the chances that I am going to read a book in the same year it comes out are vanishingly small; my spreadsheet tells me that of the one hundred forty-eight books I have so far completed in 2013, fourteen of them have been released this year—and the only reason that number is so high is because of my (recently-severed) relationship with Amazon’s early-reviewer program Vine, which supplied me with eight of those fourteen. (Two of the others were New Release library books we took out to read to my toddler-aged son.) But as often happens, I’ve gotten off track. Where I originally meant to take that is that soon after I started the Best-I-Read list, I also started an Avoid-Like-the-Plague list. I don’t publish that one every year; I have to have read at least ten books that year that get a rating of lower than two stars. (Two-star books don’t deserve that kind of calumny heaped upon them; in fact, I have given slight recommends in a select few two-star reviews.) I’m not certain there will be an Avoid Like the Plague list in 2013, but if there is, it is a certainty that James Nesper’s Betrayal at Stonehenge 1000BC, which Nesper vanity-published through 1stBooks Library (who changed their name a few years later to AuthorHouse, and are now one of the leaders in the vanity-publishing industry), will be on it. It may even be at the top (bottom?) of the list.

I had assumed, when I picked this up at Case Western’s annual Used Book orgy Sale, that it was meant for a young adult audience, given its size (it is an oversized trade, 8.5×11—rare in adult fiction, but not unheard-of in YA; the first title that comes to mind is Thomas Rockwell’s The Portmanteau Book) and slimness (the book weighs in at about one hundred pages, between a twenty-plus-page intro and the actual seventy-nine-page story). But once I cracked the cover and started reading the intro, I realized this was aimed at adults. (You can tell by the—implied—sex.) Wherever Nesper aimed, however, he missed that bullseye by the widest of margins.

We begin with a twenty-odd-page nonfiction introduction that briefly explains how Nesper got interested in the study of Stonehenge, then traces what archaeologists know of the site’s history until roughly 12-1300BCE. Then comes Nesper’s tale, which combines any number of writing techniques that usually vanish from a writer’s repertoire right around middle school, from defining words in the body of the text just after using them to throwing in a gratuitous implied sex scene every once in a while to make sure you know this is a book for adults. (Oddly, given that the sex—like everything else in the book—is there because Nesper is trying to illustrate what life was probably like for inhabitants in the area of Stonehenge at the time, it struck me that the sex would have probably seemed less gratuitous had it been more explicit—here it reads more like something written by a sniggering schoolboy for circulation amongst his classmates.) Be that as it may, the tale centers on Pro, a successful trader and the cousin of Zeff, the current high priest at Stonehenge. Zeff is interested in having Pro’s son Ola as his apprentice. Ola’s not so sure, especially since girls are not allowed to be priests and Ola is unwilling to be separated from his twin sister Oma. But this is only the tip of the iceberg, despite the fact that, were this well-written and with fully-developed characters, that plot could have easily filled a book three times this long (especially when combined with Nesper’s digressions about day-to-day life among the tribals). Zeff is slowly succumbing to what is obvious to us as severe alcoholism, though Nesper is at least aware enough to realize that folks from three thousand years ago wouldn’t recognize such, and as well, the weather seems to have turned against the tribes. Not good when the priests at Stonehenge are supposed to be interceding with the gods on behalf of the tribals in order to get them good harvests. (I know exactly where your head is going, and believe me, The Wicker Man this ain’t. Had Nesper decided to leech from Robin Hardy and David Pinner, this would probably have been a much better book.)

The subject is inherently interesting, and Nesper has some good ideas about how to beef up the interest factor for people who haven’t yet come around to the idea that any subject matter, presented correctly, can be interesting. The dark side to that postulate, however, is that even the most interesting subject matter, presented badly, can be boring as sin. (I don’t think I will ever recover from attempting to read Theodore Roszak’s awful, awful Flicker, the only book I’ve ever read that managed to make a threesome boring.) Such is the case with Betrayal  at Stonehenge 1000BC. Given a local author, a vanity-published book, and subject matter that, if not entirely original, is certainly not overused, I tried my best to find something, anything, to recommend about this book. Couldn’t do it. There are not that many books about which I can say I paid seventeen cents for (give or take a few tenths; I got eighty-eight books for fifteen bucks at this year’s Box Day) and I feel like I overpaid. This is one of them. Avoid like the plague. ½

Media critic (amateur, semi-pro, and for one brief shining moment in 2000 pro) since 1986. Guy behind noise/powerelectronics band XTerminal (after many small stints in jazz, rock, and metal bands). Known for being tactless but honest.
View all posts by Robert "Goat" Beveridge »
← Dead Presidents (1995): Big Shot Screaming “Put Your Hands in the Sky”
The Incredible Melting Man (1977): Saturnheit 451 →