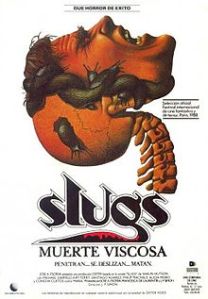 For someone who grew up during the last golden age of the horror novel—the one that started with King and Koontz in the mid-seventies and lasted until right about the end of the eighties—I haven’t read nearly enough Shaun Hutson. One of the books of his that was ubiquitous in the horror sections of bookstores in the latter half of the eighties that I haven’t got round to yet was Slugs. But if it’s anything like the Hutson novels I have read, it’s a good B-movie pulp-fiction kind of time with maybe a little more gore, and a lot more sex, than my mother would have been comfortable with had she known I was reading that kind of filth. I should have expected it from the notorious J. P. Simon (best-remembered in this country for the cult hit Pieces, which Eli Roth called one of his five favorite films in a Rotten Tomatoes interview), but the film adaptation of Hutson’s novel keeps in the titillating bits, but changes the B-grade amusement factor to Z-grade cardboard-cutout eco-thriller stuff that is neither thrilling nor, oddly, all that ecological; where Hutson was usually trying to make a point with that sort of thing, Simon just used it as backdrop, which makes the film come off even shallower than one would reasonably expect.

Plot: Mike Brady (The Warriors‘ Michael Garfield) is the chief health inspector in a small town in the middle of nowhere (actually, somewhere just over the border from Kentucky, based on a couple of lines in the movie). Over the course of a few killings that are even funnier than those in the infamous 1972 ecohorror flick Frogs, Brady comes to the conclusion that something non-human has been disturbed by local development (nope, we’ve never heard that one before) and is on the rampage. He’s right, of course, and given the title of the movie I don’t think it’s a spoiler to tell you it’s slugs. Mutant man-eating slugs. So Brady, his partner Don (soap opera actor Philip MacHale in his only feature appearance), and a local maverick scientist take on not only the slugs, but the developer, the mayor, the sheriff, and a town full of apathetic consumers.

“I was geek before geek was cool.”

Sound familiar? It should; Slugs does nothing that every other ecohorror movie you’ve ever seen has done, and most of them have done it a hundred times better. Even the really, really bad ones like Night of the Lepus and Kingdom of the Spiders. The short version: this is a terrible, terrible movie, worth watching only when drunk or trying to torture people you know who have a fear of slugs. *

Media critic (amateur, semi-pro, and for one brief shining moment in 2000 pro) since 1986. Guy behind noise/powerelectronics band XTerminal (after many small stints in jazz, rock, and metal bands). Known for being tactless but honest.
View all posts by Robert "Goat" Beveridge »
← Rules of Engagement (2000): You Can’t handle the Script, Part 2
Finding Signs (1990): Where Your Thumb Takes You →