The Red Stallion (1947): What’s That, Lassie? Timmy’s Fallen Down a Training Track? 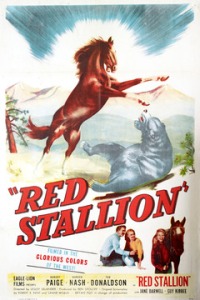 Any similarity to the cover of John Steinbeck’s The Red Pony is purely unintentional.

The Red Stallion was Hollywood’s attempt to create, in essence, a horsey version of Rusty the German Shepherd—a series of movies featuring an animal hero that would appeal to kids. (To the best of my knowledge, only two Red Stallion films got made, this and 1948’s The Red Stallion in the Rockies.) And for what it is, it does its job passably well, but that’s for what it is; it was a quickie attempt to cash in on a current trend. Done well, this sort of thing can be a classic (the obvious example being Black Beauty), but this is carbon-copy-out-the-door stuff, full of emotional shortcuts and manipulation. Which is not to say it isn’t still a fun movie if you’re in the mood for a family-friendly animal tale.

Seriously, this movie is so obscure that the only thing close to a screencap I can find is production stills being auctioned off on ebay?

Plot: Joel (Ted Donaldson, who also starred in the Rusty movies), while out on a make-believe hunt, actually runs across a real bear and scares it off with his gun. He discovers the bear had killed a horse who was protecting her newborn foal and, after a bit of deliberation, he takes the foal home, intending to nurse it back to health. He lives with his grandma, Aggie (Mary Poppins‘ Jane Darwell), a feisty old broad, and I use that term in the most affectionate sense, who has fallen on hard times and owes her creditors over ten grand (and this was back when ten grand actually meant something). When Joel discovers that the recently-deceased mare was an award-winning thoroughbred, he gets the obvious idea in his head, and sets out to train Red, as he calls the horse, to race for money. That, however, is no job for a ten-year-old boy. Enter Any MacBride (Bye Bye Birdie‘s Robert Page), a horse trainer on a nearby ranch who sees the look of eagles in Red’s eye…

It’s the post-WW2 equivalent of a Wonderful World of Disney TV movie; as soon as the major conflicts are set up (and the romantic subplot between MacBride and the rancher’s daughter, played by Giant‘s Noreen Nash), you know how it’s all going to turn out. It’s fun, it’s enjoyable, it’s entirely empty calories, but you won’t regret having watched it when you’re done. ** ½

Not a trailer in sight.

Media critic (amateur, semi-pro, and for one brief shining moment in 2000 pro) since 1986. Guy behind noise/powerelectronics band XTerminal (after many small stints in jazz, rock, and metal bands). Known for being tactless but honest.
View all posts by Robert "Goat" Beveridge »
← Senki (Shadows) (2007): There Was an Old Woman Who Lived in a Shoe
Hangar 18 (1980): They Said It Was a Weather Balloon →