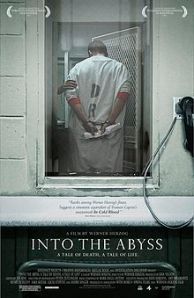 “And all the congregation brought him without the camp, and stoned him with stones, and he died; as the Lord commanded Moses.” (Numbers 15:36)

Might as well get this out of the way at the very beginning. I believe the position from which Werner Herzog made this movie is wrong. Wrong, wrong, wrong. And the movie has a clear bias towards that position; in fact, the movie makes no attempt to hide that bias, and Herzog is to be, if not lauded, at least not condemned for trying to pass this off as an impartial documentary. But I’m not going to turn this review into an argument about pro- or anti-death-penalty, because the film deserves a review more impartial than it is. What separates Herzog from biased morons like Michael Moore, Robert Kenner, John Sullivan, etc. is that Herzog—as anyone who’s watched more than, oh, three of his movies should be well aware—is just as concerned with how he tells a story as he is with the story he’s telling. This is a very important, though sometimes subtle, distinction, but I’ll tell you what: as much as I disagree with the material here, I was perfectly willing to take this ride with Herzog, just as much as I was with Grizzly Man or Cave of Forgotten Dreams or Burden of Dreams (in which Herzog is the subject, not the director) or…

Why is this? Because while Herzog is never shy about expressing his repugnance for the death penalty, and cherry-picks his interviews to make sure that everyone who’s ever on-screen shares his viewpoint, the fact that he and his subjects are anti-death-penalty is rarely the main focus of any given interview. Herzog’s way of interviewing people reminds me of John Edward (remember that guy? “And that man on TV who speaks to the dead, you know that man’s a phony”?); he’ll read the person’s body language and catch the little things that animate someone during a monologue and then grab onto that and get them to elaborate. In the very first sequence, where he’s talking to the state chaplain, the guy starts talking about how playing golf is one of the ways he centers himself, he’s talking about meditation and being out in the middle of god’s beauty, and he starts rattling off the things he might see during a day, the beauty of the grass, the dew, maybe a cow, and he says the word “squirrel” and there must be some little tremor in his voice, or a twitch of the hand off-camera or something, because Herzog’s next words are “tell me about an encounter with a squirrel.” It’s just wildly off-topic, but it’s crazy entertaining, and all the sudden our chaplain just lights up and he’s talking about this squirrel he had an encounter with and you can’t help but be riveted to the screen. It’s that sort of ability to read people that made sideshow carnies small fortunes back in the day (and John Edward a much larger one last decade); if Werner Herzog wasn’t making movies, he’d be a carny (a la Invincible) or a card sharp (a la The Grand; there’s a reason Herzog is the most believable of the non-pros at playing a card sharp in that movie). People have tells, and Herzog uses them to get wonderful interviews, or get excellent performances out of actors (if you’ve never seen My Best Fiend, about Herzog’s long working relationship with Klaus Kinski, you gotta), in the same way Patrik Antonius uses them to get millions of dollars out of the opponents he faces across the felt.

“Now we can not only describe the sound of the tornado, we can upload it to youtube!”

In other words—and this is a very long-winded way of making a point I constantly try to hammer home to people—it doesn’t matter what the subject is, and it doesn’t matter if you agree with the filmmaker’s point of view regarding that subject, when you are in the hands of a truly excellent filmmaker—and Werner Herzog is a truly excellent filmmaker. I will admit that yes, my bias against his position collided with his bias for his position in that I did not like this as well as I did many of the Herzog films I mentioned throughout this review, all of which I would recommend without hesitation. But on the other hand, I look at this and I look at some of Herzog’s early works, The Mystery of Kaspar Hauser for example, and it’s easy to see how far Herzog has come as a filmmaker in the forty-ish intervening years, and it is, as it almost always is, impossible to criticize this film on any technical level. Werner Herzog cares about the making of the film. And because of that, he has made a film that is likely to compel those on both sides of the debate. I can speak from personal experience. *** ½

Media critic (amateur, semi-pro, and for one brief shining moment in 2000 pro) since 1986. Guy behind noise/powerelectronics band XTerminal (after many small stints in jazz, rock, and metal bands). Known for being tactless but honest.
View all posts by Robert "Goat" Beveridge »
← Demon Days (2009): Right Behind
Slave (2009): I’d Like to Know Where You Got the Notion →