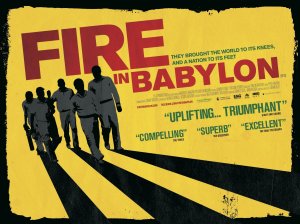 “My bat was my sword at that time, and it’s people I wanted to put it to.” –Sir Vivian Richards

With the Caribbean T20 Championships having just finished over the weekend as I write this (Trinidad and Tobago three-peated for the victory, and honestly, Guyana didn’t make them work too hard to get there in the final), it seemed like a perfect time to watch Fire in Babylon, Stevan Riley’s documentary about the rise of the West Indies cricket team during the seventies. You’ve got cricket, you’ve got human rights, you’ve got Bunny Wailer, what more could you possibly ask for?

Every wicket is a victory…

The film’s focus, obviously, is on the West Indies cricket team that was eventually dubbed the “rebels” (not to be confused with the “rebel tours” of the eighties, though those are touched on towards the end of the film), captained by Clive Lloyd but truly headed by Vivian Richards, who would go on to captain the Windies for most of the eighties (and who was recently voted the third-best test batsman in history). The film first discusses the early years of putting together what would eventually become the team that defeated England for an entire decade, focusing on their first few disastrous trips to Australia in the mid-seventies, focusing on the kill-or-be-killed tactics of the infamous Lillee and Thomson, whose “injure the batsman at all costs” style would be copied by a few of the West Indian cricketers later in the decade (and which has since been outlawed). After that, it focuses on the tours of England and what they meant in terms of the human rights aspect—“you brought this game to us, oppressors, and now we’re better than you at playing it.” They were indeed for quite a while.

…every demonstration is a loss.

It’s an obvious must-view for cricket fans, and I think that sports fans of any stripe will identify with the national-obsession angle (“when you got out of school…you bowled until the light faded”). As far as everyone else, well, let’s put it this way—I’m not a sports fan at all, really; T20 cricket and horse racing are the only two spectator sports I’ve ever really been a fan of. But sports documentaries? I’ve always loved them, for some reason. There’s just something about them..and Fire in Babylon has a whole lot of that something, be it using the sport as a lens for the bigger picture or highlighting the colorful personalities or scoring compelling interviews with fantastically famous people who you never knew were obsessed with the subject (again: Bunny Wailer!) or whatever. This is phenomenal. ****

Media critic (amateur, semi-pro, and for one brief shining moment in 2000 pro) since 1986. Guy behind noise/powerelectronics band XTerminal (after many small stints in jazz, rock, and metal bands). Known for being tactless but honest.
View all posts by Robert "Goat" Beveridge »
← Vampires in the Lemon Grove (2013): Improving upon Perfection
The Baby (1973): You Weaned Him When? →