RSS Feed
← Swing!: Adventures in Swinging by America’s Top Erotica Writers (2009): I Am the Keymaster
Sukiyaki Wesern Django (2007): You’ve Got Red on You →

Island of Doomed Men (1940): I Am a Fugitive from Peter Lorre’s Plantation 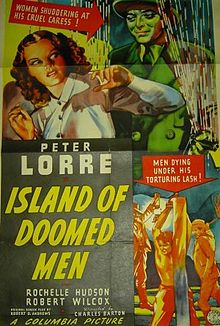 The dime-novel-cover movie poster is perfect for this little exploitation tale.

Pretty amazing that you could get away with this sort of thing as late as 1940, though they did soften the racist blow by having the male lead be white (and, of course, devastatingly handsome); uneasy undercurrents watching it today, but it’s still surprisingly compelling. Much of this, of course, is down to Barton, one of the best-loved directors no one’s ever heard of; he helmed this while in the middle of his first much-beloved film series (the Five Little Peppers movies), then went on to be a late addition to one of early filmdom’s biggest franchises, Abbott and Costello. Barton directed what may be their best-remembered movie, Africa Screams, before turning to television, where he was synonymous with some of the iconic shows from the fifties and sixties (including Hazel, Dennis the Menace, McHale’s Navy, and Petticoat Junction) before ending his career topping them all with Family Affair. And where does this sordid little prison romance fit into all that? I’ll let you figure it out, because I haven’t.

“You see, my dear, nine years ago I was a serial killer of children in Austria…”

Stephen Danel (Peter Lorre) is an humanitarian, of sorts. He likes to hire people who are just being paroled from prison. What he never tells the prison officials is that he takes them back to the island where he lives, chains them up, and makes them slaves in his mines. His wife Lorraine (Rebel Without a Cause‘s Rochelle Hudson) is also there on the island, just as trapped as any of the prisoners, but she sees a possible way out when her husband brings back wrongly-convicted Mark Sheldon (The Man They Could Not Hang‘s Robert Wilcox), a guy who’s got that kind of jaw that says “I’m not going to take any of this guff.” Sure enough, as soon as Sheldon finds out what’s really going on on this little island paradise, he starts trying to organize slaves and overseers alike into a mob to overthrow their tormentor, all the while passing love notes back and forth to Mrs. Danel through a house servant.

“You may think you have the upper hand here, Mr. Danel. But as soon as I figure out how to get myself untied from this tree…”

It’s shallow, it’s unintentionally funny, it’s ludicrous, and it’s a great time. At only a little over an hour, it’s not like you’re putting a huge time investment into it, either. Lorre chews scenery with the best of them, Wilcox stands around and looks grim when he’s not evangelizing, and Rochelle Hudson has a great look of trepidation. Which is good, since it’s the only look she wears in about three-quarters of the scenes she’s in. All well and good, and watchable to boot. If you want to do more thinking about it, mull over how the painfully obvious pro-union message would have been received ten or twelve years later. (I’m half-surprised Barton didn’t get blackballed.) Otherwise, just sit back and turn your brain off. ***

Gotta scroll down to get to the trailer on this one.

Media critic (amateur, semi-pro, and for one brief shining moment in 2000 pro) since 1986. Guy behind noise/powerelectronics band XTerminal (after many small stints in jazz, rock, and metal bands). Known for being tactless but honest.
View all posts by Robert "Goat" Beveridge »
← Swing!: Adventures in Swinging by America’s Top Erotica Writers (2009): I Am the Keymaster
Sukiyaki Wesern Django (2007): You’ve Got Red on You →