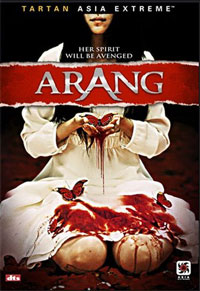 The cover promises Yet Another Southeast Asian Horror Film… and the disc delivers.

The downside of Arang, the first feature-length offering from Blind director Sang-hoon Ahn, is that it treads no new ground at all; it takes a common Korean mythological figure (if you google Arang, you’ll come up with many versions of the story; even Wikipedia has an entry on the Arang story), weds it with a detective story, and comes up with, well, every Asian supernatural mystery that’s been made since the mid-nineties. The upside of Arang is that it separates itself from the pack with some of the finest cinematography you’ll see outside a Kiyoshi Kurosawa film, and even were the film not all that hot (and it is a well-made enough film even without the incredible photography) it would be worth seeing for that reason alone.

It’s shot composition like this that truly sets this movie apart from the pack.

Plot: So-young (Secret‘s Yun-ah Song) and her brand-new partner Hyun-ki (The Recipe‘s Dong-wook Lee) are assigned to the case of a murdered schoolgirl in a backwater coastal village; it doesn’t take them long to discover that this case is related to a murder a decade earlier—that of Hyun-ki’s first girlfriend, Min-jeung (Thirst‘s Ok-bin Kim). Needless to say, Hyun-ki grows obsessed with the case quickly—but it’s So-young who begins to have visions of the murdered girl…

Cinematographer Kwang-suk Chung has no other credits listed at IMDB. That doesn’t necessarily mean anything where foreign crew members are concerned; IMDB is notoriously incomplete when it comes to work outside Hollywood/Bollywood. But if it is the case, it’s a crime against humanity that must be rectified as soon as possible; what Chung did with cameras in the filming of this movie is something special indeed. The salt house which sits at the center of the action [it’s the focus of the bottom graphic I ran here] is so lovingly rendered that it becomes a character in the story; the only building I can think of done as well in a recent film is the abandoned house in Leonardo DiCaprio’s extended dream sequence towards the end of Inception, but there is an order of magnitude more substance here. This is cinematography as a living, breathing thing, and work like this is not seen nearly often enough.

Which is not to overstate (though I guess I already have) the movie as a whole; it is still somewhat derivative, if very competently done and well-acted. Even if you think you’ve had your fill of supernatural Asian mysteries and long-haired ghosts, give this one a look; if nothing else, you will find it very beautiful. *** ½

I’m so up on these shot compositions I didn’t even thumbnail this one, just ran it as the closing graphic. You could put a framed print of that on your wall and it would not be out of place ferfooxache.

Media critic (amateur, semi-pro, and for one brief shining moment in 2000 pro) since 1986. Guy behind noise/powerelectronics band XTerminal (after many small stints in jazz, rock, and metal bands). Known for being tactless but honest.
View all posts by Robert "Goat" Beveridge »
← Red Riding Hood (2003): All the Better to Protect You With, My Dear
My Friend Bernard (2012): Now with Extra Benshi! →