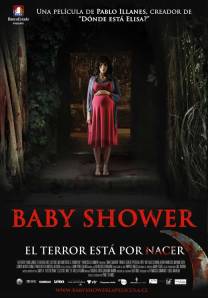 I’m still trying to figure out exactly what’s going on in this poster. Is that just a disembodied arch in the woods? Or has nature invaded the indoors? And what does this have to do with stupid baby shower party games?

Let me throw a scenario at you. See if it sounds familiar:

You want to make a sure-fire box-office-draw horror picture. You’ve got a not-so-great script. It’s pretty derivative, actually. (It may actually be a crappy remake, though it isn’t in this case.) How do you get butts in seats? Here’s an idea: let’s cast a bunch of young-and-beautifuls who are TV stars instead of movie stars!

“You know, if you wanted to be a surrogate, you could have told me nine or ten months ago…”

It should sound familiar; it’s been the basis of at least half the worthless “horror” pictures that have come out of Hollywood in the past two decades. It seems Chile, at least, sat up and took notice of this; this is the exact same formula that was used in putting together the oddly-praised Baby Shower, a movie that’s just as ridiculous as, say, the awful 2005 House of Wax remake. Why is it getting praised? I couldn’t tell you for certain, but my guess is “anything made outside Hollywood is better than anything made inside Hollywood” syndrome. Because, viewed with a jaundiced eye, this is just… bad.

Plot: Ángela (Ingrid Isensee) is about to give birth to twins, and it’s time for the baby shower. Four of her friends—Olivia (Claudia Burr), Manuela (Kiki Rojo), Claudia (Francisca Merino), and Ivana (Sofía García)—gather at the country manor where Ángela has been staying for the celebration. Or so they think. This has actually been set up for the purpose of airing grievances. All of which only gets worse when one of the group, who’s had enough and decides to leave, runs into hippy-dippy Soledad (Patricia López) leading a sing-along in the forest with a bunch of kids…

You never know who your true friends are until you’re all cast in a telenovela.

If you go in expecting a horror film, you’re going to hate the first half even if you have no standards for enjoyment of horror films—it plays out like a telenovela. On the other hand, if you go into it expecting a telenovela (the same conditions apply), you’re going to hate the second half, which is about as generic a torture-porn film as you’re likely to find. These are two sometimes-great tastes that really, really do not taste great together; you’re much better off avoiding this one. I’m giving it a single star because I admit to being pretty darned impressed with the make-up department being able to ugly up the stunning Patricia López as much as they did and actually get away with it. *

Media critic (amateur, semi-pro, and for one brief shining moment in 2000 pro) since 1986. Guy behind noise/powerelectronics band XTerminal (after many small stints in jazz, rock, and metal bands). Known for being tactless but honest.
View all posts by Robert "Goat" Beveridge »
← Afternoon of the Sorceress (2005): Hou-Hou
A Brighter Summer Day (1991): Operator Dead, Post Abandoned →