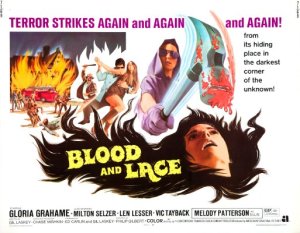 Poster? For this gem, I’m giving you the lobby card!

As I am wont to do now and again, I found a going-out-of-business warehouse sale and scored a small mountain of movies to watch. Well, mountain may be a bit inaccurate, but I can build a good foot-and-a-half pyramid out of VHS and DVD cases new to my house. (That this is because yet another local video store chain is on the brink of going out of business has not escaped my notice, and I am no less saddened because I gained by it.) The only problem with such bounty is that sometimes you have so many choices you end up wondering what to watch first. Any of the hundred movies I haven’t seen before? No, not me. I decided I’d revisit Blood and Lace, a movie I first saw over thirty years ago on the late-night creature feature. Back in the late seventies, for some reason, there was a minor rage in Pittsburgh for double-billing two of my favorite cheesy seventies horror films, Blood and Lace and Shriek of the Mutilated. I saw both countless times in the late seventies and early eighties, and then they dropped off the radar. Shriek was released on DVD in 2005, and I picked it up immediately. This one still awaits a proper DVD release, so this was an old, old VHS copy someone dug out of the dark corner of a warehouse somewhere. This, of course, just made the nostalgia all that much greater. Remember, kiddies, back in the day, everything was broadcast and constantly adjusting the rabbit ears on your awesome twelve-inch portable TV. How could a crisp, clean transfer do that justice? In any case, seeing it through eyes that have seen another quarter-century-plus worth of movies, Blood and Lace is not nearly as complex as I thought back in the day, nor as well-acted, and I put much of my enduring affection for the film down to simple nostalgia. On the other hand, for a PG-rated theatrical release (that lasted in theaters maybe two weeks before going to the late-night creature features), Blood and Lace is a surprisingly twisted little movie.

Seriously, if that shot doesn’t shriek “giallo!” at you, go watch every movie Dario Argento directed before 1976, then come back and watch this again.

We open with the giallo-style hammer murder of Edna Masters (Louise Sherrill, writer and director of another wonderfully cheesy late-sixties horror flick, Ghosts of Hanley House). And yes, giallo-style; there’s no doubt in my mind that screenwriter Gil Lasky (the producer of the infamous Spider Baby) had Bava’s Blood and Black Lace in mind when titling this monstrosity. (Seriously, look at the original posters for each.) Be that as it may, Edna left behind a daughter, Ellie (F Troop‘s Melody Patterson), who’s something of a rebellious child. When she tries to run away from her court-appointed social worker, he sends her to a local orphanage run by Mrs. Deere (It’s a Wonderful Life‘s Gloria Grahame, showing how far the mighty can fall) and her crazy handyman Tom (Kelly’s Heroes‘ Len Lesser). We find out very early on that runaways in this place never actually make it, instead coming to a very bad end at Tom’s hands, but that’s just the tip of this perverse iceberg. Once she gets to the orphanage, Ellie strikes up a friendship with Walter (Night of the Witches‘ Ronald Taft), immediately incurring the wrath of her roommate Bunch (How Sweet It Is!‘ Terri Messina), who’s been after him for a while. But the dynamics between the kids, in general, take second chair to the whacked-out psyche of Mrs. Deere, who plays everyone at the home like a puppet. There’s also a police detective, Calvin (Vic Tayback, probably remembered best these days for the long-running sitcom Alice), who seems to take more than a protective interest in Ellie.

Now, come on, don’t these look like the perfect foster parents to you?

Put aside the gaping plot holes (what’s Walter, who describes himself as “almost twenty-one”, still doing at an orphanage?), the generally awful acting, Philip Gilbert’s complete inability to direct (he has no other credits of any kind listed at IMDB) and Gil Lasky’s script, which is utterly useless as the basis for a suspense film. Instead, focus on the fact that this movie got a PG rating (well, GP at the time) in 1971—only two years after Midnight Cowboy got an X!—when it contains overt references to pedophilia, rape, and incest. (And this isn’t taking into account Mrs. Deere’s crazy speculations, which are amusing, but not weird enough to warrant an R. I don’t think.) Obviously, in the early seventies, it was much more shocking to be gay. Either that, or the MPAA figured that this movie was so incoherent no one would be able to figure out what’s going on, which is not all that unreasonable a stance.

The movie is very little seen nowadays (probably because we understand that rape and pedophilia are more shocking than being gay now…I think), and in some ways that’s probably for the best. Six years later Halloween came along and changed American horror forever. I get the feeling that many of today’s kids would find this movie boring. And it is laughable, but like Shriek of the Mutilated, it’s such a train wreck that you simply can’t stop watching it. And when that last line hits and you realize the whole thing has been the biggest theatrical shaggy-dog joke since Ocean’s Eleven, you can’t help but admire the hubris it must have taken to make this movie. Lasky and Gilbert must have been as crazy as Mrs. Deere to even try. It’s a movie that falls into the “transcends bad and enters the realm of cheesy greatness” category. See it if you get a chance. ** 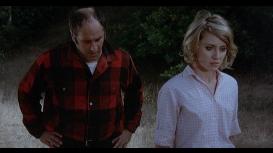 “You see, honey, I may be old enough to be your grandfather, and Viagra won’t be invented for another quarter-century, but I run this great diner in Phoenix…”

Media critic (amateur, semi-pro, and for one brief shining moment in 2000 pro) since 1986. Guy behind noise/powerelectronics band XTerminal (after many small stints in jazz, rock, and metal bands). Known for being tactless but honest.
View all posts by Robert "Goat" Beveridge »
← Hopscotch (1980): Now More Than Ever!
Nor Noise (2004): The Best Noise Documentary I’ve Seen So Far →