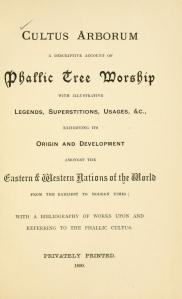 I don’t want a bibliography of works on my phallic cultus. I can barely manage to hold a single volume with it!

Oh, those horny Victorians. “Privately published” books in the last nineteenth and early twentieth century were often privately published because they were considered too prurient for the general public—or at least that’s what the marketing said. (As a benchmark of what was considered prurient in the 1890s, the contributor of this book to Project Gutenberg and the other public domain repositories where one can download a copy these days was Princeton Theological Seminary…) If you’re looking for prurient interest, well, the title is about it, plus a scattering of uses of the terms “phallic”, “lingam”, and “yoni”. I won’t sear to it, but I’m estimating each is used less than a dozen times in the narrative. This is not fap material, folks.

On the other hand, it’s an interesting survey of trees in religious ritual, though one can expect the kind of florid hyperbole one expects if one reads, shall we say, “fantastical nonfiction” from the era (A great example, also free for the taking: Walter Hubbell’s The Haunted House: A True Story), and the anonymous author seems to take a good deal of stuff at face value we would (and you likely will) laugh at in modern times.

Quick, fun read if one is into comparative religion, but heavy-breathers will probably want to ply their trade elsewhere. ***

Media critic (amateur, semi-pro, and for one brief shining moment in 2000 pro) since 1986. Guy behind noise/powerelectronics band XTerminal (after many small stints in jazz, rock, and metal bands). Known for being tactless but honest.
View all posts by Robert "Goat" Beveridge »
← The Mummy (1932): Silliness, but Inspired Silliness
The Girl Who Tried to Catch the Man (2011): It Was a Pleasure to Burn… →